A pre-war building was razed when a fire broke out in Petaling Street, here. 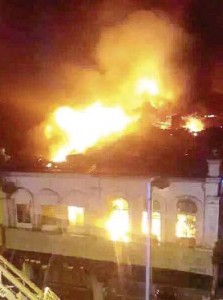 City Fire and Rescue Department chief Khirudin Drahman said the authorities were alerted to the incident at the two-storey souvenir shop at about 4.40am by an eyewitness.

“We immediately deployed 55 personnel from seven stations to the location,” he said.

Khirudin said the blaze was brought under control by 6.15am.

“The shop was 100% destroyed in the incident. We are still investigating the cause of the fire,” he said.