KUALA LUMPUR: Seven shops were destroyed in a fire that swept through the Awan Besar Rest and Recreational (R&R) stop on the Kesas Highway heading towards Shah Alam here. 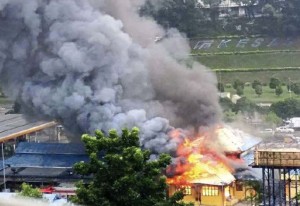 “When we arrived, seven out of 15 shops were already destroyed.

“Customers ran to safety when the fire broke out. We managed to put out the fire about 40 minutes later,” he added.

Samsol said a witness claimed that he heard an explosion coming from a furniture shop, which was closed on Sundays.

He said the cause of the fire and losses incurred are still being investigated.